Cancelling Your Town’s Favorite Event: Don’t Rain on Our Parade

No one wants to tell 47,000 people the party is over. But on Sunday, May 19, 2019, that’s exactly what happened. And this was no ordinary party. This was the Village of Lombard’s 150th Birthday party, in conjunction with the oldest and largest running event in DuPage County…. The Lilac Time Parade.

Before I continue, stay with me for a moment as I give you some back story on what the Lilac Time Parade is all about. The Village of Lombard is located around 30 miles west of Chicago and is extremely proud of its history. Particularly… its lilac history. That’s right. Lilacs.

Lombard is widely known as the Lilac Village. In the 1950s, all Village vehicles were lilac colored. Can you imagine purple police squads? Today, lilacs still grace Village vehicles because our logo is… you guessed it… a lilac. This all stems (no pun intended) back to the founder of the town who began a lilac garden.

Over time, lilacs from all over the world have been added to this garden, which was renamed Lilacia Park. Years ago every new resident was given a free lilac bush when they moved in so you can imagine how many lilacs are in this town. I can personally attest that yes, the air really does smell like lilacs in the spring. But that might also be because our street sweepers use lilac scented cleansers. Our blood really does run purple in Lombard.

Every May, the town celebrates Lilac Time, a two-week-long festival with daily events throughout the community. We’re talking live music, historic tours, beer and wine events, the art and craft fair and even the black tie not-so-optional event, the Lilac Ball. Don’t even try to find a purple dress or tie to purchase in Lombard during this time, because they’re sold out.

The festivities begin with the crowning of the Lilac Queen during Coronation in Lilacia Park and ends with the Lilac Time Parade, which was supposed to celebrate its 89th trip down Main Street this year.

That is… until the Village came along and ruined everything.

The weather forecasts leading up to the 2019 Lilac Time Parade were rocky at best. We held meetings with our fire department and contacted the National Weather Service for their opinions. We all decided it would be best to plan for the worst, but hope for the best.

On the Tuesday before the Sunday parade, we could see the writing on the wall, and people in the community were starting to ask questions. So we called a meeting with the police and fire departments, the Village Manger and Assistant Village Manager, members of the Lilac Time Parade Committee, public works and me.

The purpose of the meeting was mostly to ensure that Village officials and the Lilac Time Parade Committee were on the same page should a cancellation be necessary. The last thing we wanted to do was surprise the committee with a decision to cancel. We wanted to make sure they were partners with the Village in any decision. This turned out to be a saving grace in the end.

We discussed the forecast and the possibility of severe storms and all agreed that the safety of attendees and participants was paramount. At the end of this meeting it was decided we would post a public message, warning the community that cancellation was possible due to severe thunderstorms.

I did my best to keep things light-hearted while sharing the realities we faced with the weather forecast. After adding a few obligatory lilacs to the graphic, we posted it. 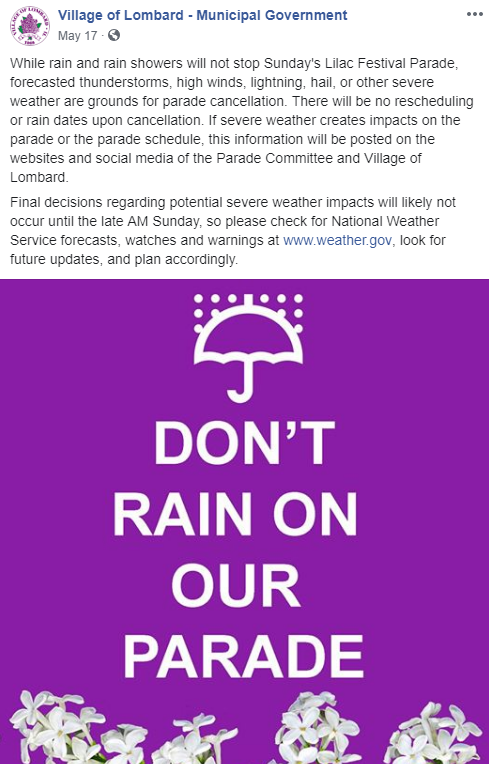 As the week progressed we continued to watch the weather and communicate regularly with the Parade Committee. And we weren’t the only ones watching the weather. Groups from across the area scheduled to be in the parade began to cancel, including classic convertible cars that had signed up to carry participants. This created a whole new set of obstacles for the committee as they no longer had the cars needed for the parade. I kept this in the back of my mind as we moved forward.

The day before the parade we posted another update to the public on social media and the Village’s website. By using the parade logo and having the Parade Committee share the message on their social media accounts, the Village was able to minimize backlash from those involved in planning the event. We reminded everyone to keep following the Village’s Facebook and Twitter pages for updates and announcements. 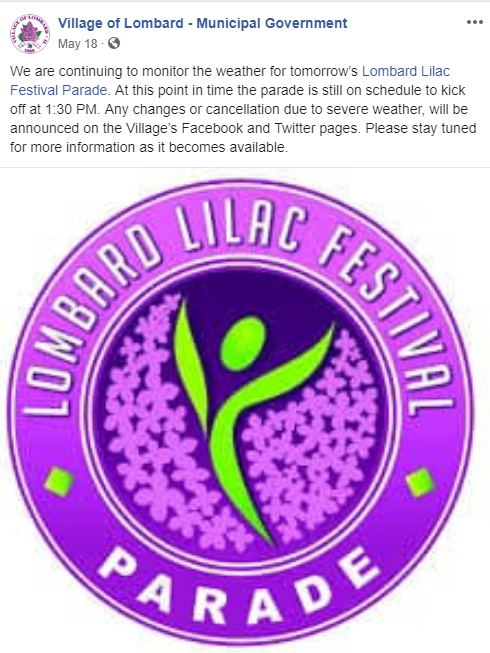 On the morning of the parade, we held another meeting at Village Hall. This time we also had the head of the DuPage County Emergency Management Office and a representative from the National Weather Service on speaker phone, and our Village President was in the office as well.

And that’s when it was decided. It was simply too dangerous to hold the parade. We were going to have to cancel the Lombard’s 89th Annual Lilac Time Parade, celebrating the Village’s 150th birthday. The candy wouldn’t be thrown. The handmade floats wouldn’t be displayed. All of that waving practice by the Lilac Queen and her court would go to waste.

The decision was made just after 12 p.m. I (literally) ran to my office and put the finishing touches on a statement I had been drafting over the past few days.  Twenty minutes later I was posting the statement on social media.

There are a few things that people who manage social media accounts know for sure. It all boils down to one thing: it’s all about trust. Does our audience trust us and our decisions? Should they? Have we given them a reason to trust us? It’s moments like this that allow us to find out. It’s sink or swim.

In my years as a public communicator I have learned that if you make a tough decision, you’d best be ready to explain it. So we were ready. As the wind kicked up and the skies turned black in the distance, I took a deep breath, and clicked “share now.”

In response to a call with the National Weather Service and in consultation with the DuPage County Office of Emergency Management, a high potential of severe weather, including winds up to 60 m.p.h. and quarter sized hail, is forecasted for Lombard at approximately 2:00 p.m.

The National Weather Service communicated that they have a high confidence that storm activity west of Lombard is heading toward Lombard. This storm activity includes thunderstorms with lightning, and heavy downpours, along with strong winds from of 40 m.p.h., with locally damaging wind gusts up to 60 m.p.h.

A decision was made to cancel the Lilac Festival Parade for the following logistical reasons:

Public safety personnel and parade committee volunteers are currently notifying parade units and individuals that are currently in the parade area of the cancellation.

We understand the amount of time and work that goes into each parade unit and we share everyone’s disappointment in this outcome. However, with the information provided to the Village by the National Weather Service and the DuPage County Office of Emergency Management, we do not feel confident that the parade would be safe for participants or attendees. Unfortunately, we cannot negotiate with mother nature and it is our responsibility to ensure public safety above all else. 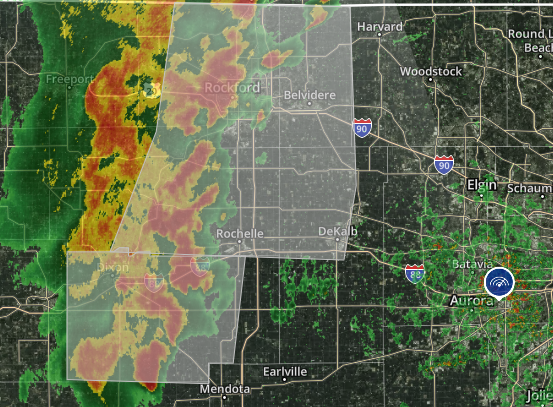 (We were the blue mark next to Aurora.) I think our Village President summed up all of our fears when he turned to us and said, “This is gonna be a blood bath.” But before the purple blood could hit the streets, we started to get a feedback from residents: 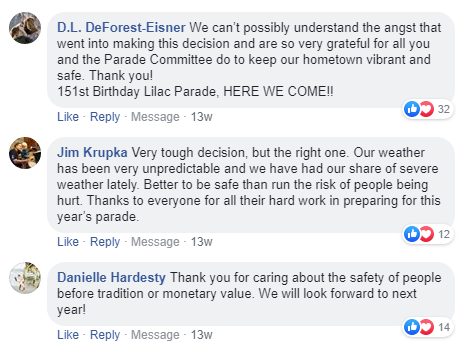 And then we waited. For the fire and brimstone to rain upon us. I was like Lt. Dan in that scene in Forest Gump when he’s on the mast of a ship during a hurricane. Cheering the storm on and hoping for (modest and harmless) devastation. And just when it looked like the heavens would unleash the storm of all storms…

I’m gonna take a moment and let that sink in. We cancelled the largest and longest running parade in DuPage County, and the pride and joy of the Village of Lombard… and it turned out to be a beautiful day.

But imagine our surprise when residents came to our defense: 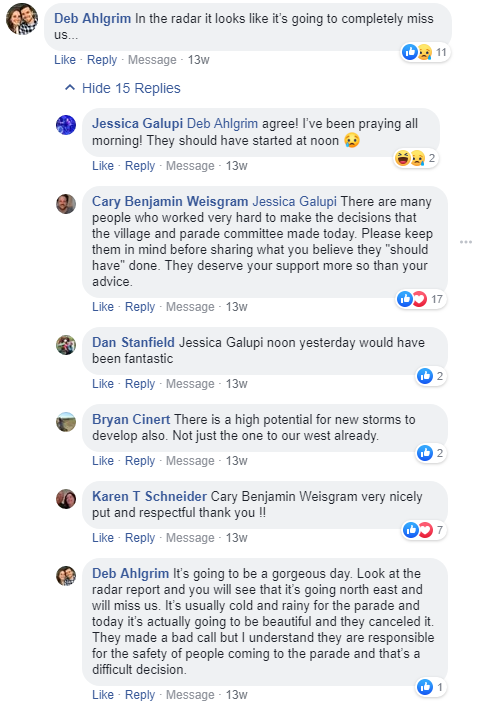 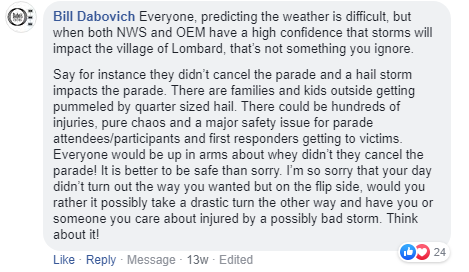 Of course, we had those few snarky comments, but overall, we had a great response from 90 percent of residents. I have to believe that this is entirely due to our transparency. Here’s the breakdown and what I’ll take away from this whole thing:

Cancelling the 2019 Lilac Time Parade was one of the biggest disappointments we could have imagined during our Sesquicentennial year. But during our after-action meeting, everyone at the table agreed it was the right choice, and we would do it again if we had to.

I’m selfishly hoping we really, really don’t have to. But public safety is our top priority.

We did our jobs. We kept people safe. We have no regrets.

And we’re already looking forward to the 2020 parade; one suggested theme is "Happy Belated Birthday, Lombard."