A native of New Orleans, Louisiana, and a proud graduate of Louisiana State University and of the Disney Institute, Tom Bryson began his career in municipal government with the City of Duncanville, Texas in 1990, after six years as a newspaper reporter in northwest Louisiana and east Texas.

In 1999, Tom made the move from suburban south Dallas county to the north and became Communications Director for the City of Farmers Branch, where he serves today. At Farmers Branch, he is responsible for all City communications activities and a variety of City media, including the City's Internet presence and social media, video production, media relations, eNews propagation, special projects and event assistance, print publications and more. Additionally, he serves as the announcer for most City special events. 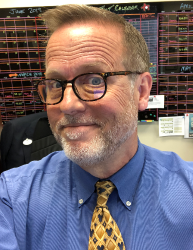 Since 1999, the Farmers Branch Communications office has been the recipient of more than 50 awards from state and national organizations for communications and marketing activities.

Tom has been a member of 3CMA since 1997 and has served on the awards committee, has served as a Savvy judging team captain numerous times and presented at the annual conference almost every year since 2000. He is also a past president of the Texas Association of Municipal Information Officers and a founding member of the Advisory Board of the Certified Public Communicator program at Texas Christian University (of which he is also a graduate).

He considers himself a writer first and foremost and likes to refer to his career as the "best possible use for a journalism degree" since he gets to do TV, print, Internet, social media and radio all at the same time … and frequently all on the same day.